I dropped into a yoga class this afternoon and within 10 minutes I witnessed something not surprising to me, but perhaps interesting to you.

When I came into the studio a man was at the desk in front of me, paying for class. He was a muscular white man, handsome and probably in his thirties. He reminded me of a fit, off duty cop or soldier. Maybe it was just his hair cut. Maybe it was his camo shorts.

He turned, saw me, and did the dude head nod, the one guys do when they want to say hello or thank you to a male stranger. I was wearing a hat and a hoodie and he thought I was male.

After shedding layers and saying hello, I saw him do a visible double take. His mannerisms shifted; his perception of me shifted. He was still pleasant, just different.

We went into class, he settled on a spot in front of me, and we each turned our heads when another yogi entered the room.

She was tall and athletic and beautiful. I guessed she was a college student. I will admit that I took a second look. While happily married, I am human, and I allowed myself a second to admire her. Then I looked away and started to focus on my practice.

But when I was no longer looking at her, I noticed the guy in front of me continue to stare. His mannerisms shifted again. He was still pleasant, but different.

He stretched in her direction. He focused his gaze too long on her. He was too focused on her. It wasn’t necessarily predatory but it was greedy, as if her presence was something he couldn’t get enough of and it was her job to provide him with the thing he wanted.

I don’t know if she noticed, but I did. Not that she needed or wanted it, but I felt like I had to protect her somehow.

Men don’t look at me this way, but I know the look and when I see them ogling a woman I also know some of those feelings behind it. I know those feelings of wanting to take it all in, to maybe flirt, to even be turned on by another’s beauty and possibility, but I don’t look at women like that.

This guy was likely harmless, and once class got started, he settled down a bit. But in 10 minutes I watched his perception of me change, and I saw his perception of himself change as he watched the woman a few mats from him. I seemed to be disposable to him, and he suddenly seemed like a winner and the pretty woman should have been his prize.

However, mixed in with my feelings of human nature and frustration is respect.

When I see beauty, I respect it enough to see it but not claim it.

When I present myself, I respect myself enough to put into the world what makes me feel beautiful.

Not always, but often enough that it is something that stays with me, cis-gender straight men feel deceived and/or uncomfortable by my appearance. These are often the same men who make a woman uncomfortable by staring at them, as if unsolicited stares are something to covet.

But I see you guys, and I see the way you stare at people. It’s not becoming.

Here’s a tip, from one lady lover to another: If you want to get close to something beautiful, you need to respect it first.

This post was originally published on Family Rhetoric by Amber Leventry on November 2, 2017. 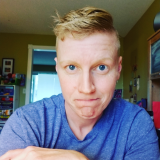